A Bangladeshi man was found guilty in a U.S. court of setting off a pipe bomb in an underground passage in the New York subway system last year, and he could face life in prison for the “terrorist act” that injured himself and three others, officials and reports said.

Akayed Ullah was convicted in a jury trial on all six terrorism counts brought against him, including carrying out the attack on behalf of the Islamic State (IS) terrorist group, news reports said.

“Ullah’s sinister purpose was to harm and terrorize as many innocent people in his path as possible, by using deadly violence to make a political statement,” Geoffrey S. Berman, the U.S. Attorney for the Southern District of New York, said in a statement.

“Ullah’s conviction by a unanimous jury of New Yorkers falls on an Election Day, which fittingly underscores the core principles of American democracy and spirit: Americans engage in the political process through votes, not violence.”

Investigators said Ullah used matchheads and a piece of pipe he found at a construction site to build the bomb, which he strapped to his body and set off on Dec. 11, 2017, in the name of IS.

Federal authorities charged him with providing material support to a terrorist group; bombing a public place; using a weapon of mass destruction; destruction of property by means of fire or explosives; conducting and attempting to conduct a terrorist attack against a mass transportation system; and using a destructive device during and in furtherance of a crime of violence, according to a statement from the U.S. Attorney’s Office that was issued shortly before Ullah was arraigned in January. 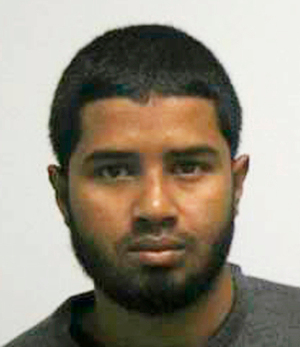 During closing arguments on Monday, the defense challenged prosecutors’ claims that Ullah was a terrorist.

“He wanted to die. He wanted to take his own life and only his life,” attorney Amy Gallicchio said, according to the Associated Press. “This is not a suicide bombing. This is not a terrorist attack.”

Earlier, Assistant U.S. Attorney George Turner had said Ullah had tried to terrorize Americans when he set off the bomb in a pathway linking the New York City subway to the Port Authority bus terminal in Manhattan.

Turner also said that Ullah followed IS propaganda online and wanted to act as a “lone wolf,” AP reported.

“It was a disturbing act by a disturbed man,” AP quoted Gallicchio as saying. “This is not a lone-wolf attack.”

Interviewed just days after the blast, Ullah’s wife Jannatul Ferdous Jui told BenarNews that her husband showed no signs of planning a terrorist act in the United States.

Still, she called for a proper investigation.

“I want the U.S. authorities to investigate him. If he is guilty, he deserves punishment,” she said at the time.

Ferdus Jui said her husband, who had been living in Brooklyn, N.Y., since 2011, visited Bangladesh in early September 2017, months after she gave birth to their son.

He made the trip to arrange U.S. immigration paperwork for his family, officials said. Ullah arrived in the United States on a family immigrant visa six years earlier because he had an uncle who was a U.S. citizen.

During her husband’s visit to Bangladesh, Ferdous Jui said, he made a side trip to Rohingya refugee camps in southeastern Cox’s Bazar district to distribute medicine to refugees.

Before the bombing, Ullah had no criminal record in the United States and in Bangladesh, according to law-enforcement officials from both countries.

ABT is linked to al-Qaeda, and has been blamed by Bangladeshi authorities for a series of killings that targeted secular bloggers in the country between 2015 and 2016.

Watch Out: Bangladeshi Minister Comments on His Published Photos with Fancy-looking Timepieces