A woman carries bouquets of flowers as she attends a ceremony marking the first anniversary of a terrorist attack at the Holey Artisan Bakery, at the site of the now-closed café, July 1, 2017.

Bangladesh’s government will distribute financial compensation and mementos on Sunday to relatives of hostages killed in an attack at a Dhaka café in July 2016, the worst terrorist act in the nation’s history, home ministry officials said.

They said the families of 19 of the 20 hostages who were slain at the Holey Artisan Bakery were to receive 15,000 euros (1.5 million taka or U.S. $18,400) as compensation. The government contacted the families of all civilian victims of the overnight siege.

“The Honorable Home Minister will hand over the bank checks and crests [mementos] at the ceremony at the Rajarbagh police line auditorium,” Shamsur Rahman, an additional secretary of the home ministry, told BenarNews.

“We have sent the financial honorarium to nine Italian and six Japanese victims through our embassies in Italy and Japan as they would not attend the ceremony.”

The Bangladeshi and Indian survivors plan to donate the money to a foundation created in memory of the victims of the attack, which took place on July 1-2, 2016, according to the home ministry.

“Hopefully I will attend. This is good news that the government has not forgotten the Holey Artisan café attack. We do not want to see any terrorist attacks. No parent should lose their children in this way,” a relative of a Bangladeshi victim told BenarNews on condition of anonymity.

Rahman said the government decided this was the proper way to honor the victims.

“You cannot compensate a death, so we call it a financial honorarium. The purpose of the ceremony is to give the message to the world that Bangladesh has not forgotten the Holey Artisan attack,” he said.

In an interview with BenarNews on the eve of the first anniversary of the café attack, Bangladeshi Home Minister Asaduzzaman Khan Kamal described it as unprecedented.

“A massacre of this magnitude never happened in our country,” he said. 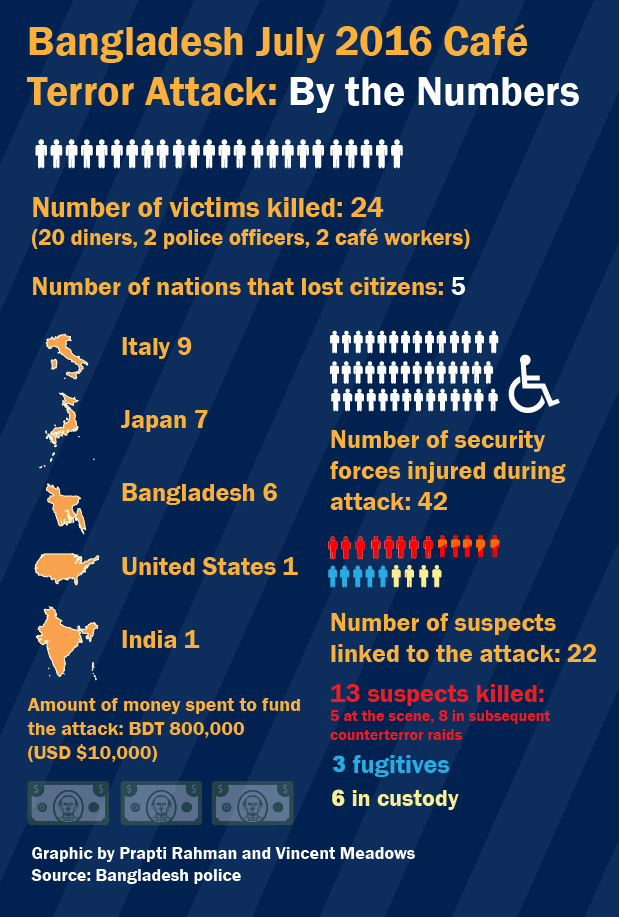 On the evening of July 1, 2016 – a Friday – five militants armed with AK-22 rifles, grenade and machetes, stormed the upscale café in Dhaka’s diplomatic zone, took diners hostages and killed 20 people – nine Italians, seven Japanese, one Indian and three Bangladeshis. In all, 29 people died including two police officers, two café workers and the militants.

The gunmen were linked to Neo-JMB, an offshoot of the militant group Jamaat-ul Mujahideen Bangladesh (JMB).

Unlike JMB, Neo-JMB is known to subscribe to Islamic State’s (IS) hardline ideology. Before commandos brought an end to the attack, IS media released photos of the attackers calling them IS “soldiers” and disclosing that they had killed 20 people inside the café.

Minister Khan and other government officials have since denied that IS has a presence in Bangladesh and attributed the attack to home-grown militants.

Meanwhile, police have not finished their investigation into the attack, lead officer Humayun Kabir told BenarNews.

“This is very difficult to set a timeline for submitting the investigation report because some suspects remain at large,” Kabir said. “So, I cannot share findings of the report at this moment.”

Previously, Monirul Islam, chief of counter terrorism and transnational unit of police, told journalists that the report could be submitted to the court by the end of 2018.

Investigators have detected 22 suspects linked to the attack. Of those, 13 have been killed in encounters with the law enforcement agencies, six are in jail and three are fugitives.

One man, North South University professor Hasnat Karim, a Bangladesh-born British citizen, was identified as a suspect. He was the first to be taken into custody in connection with the terrorist siege. Officers alleged he was linked to the attack because he was able to leave.

Karim, who has proclaimed his innocence and said he was at the café with his wife and two daughters to celebrate a birthday on the night of the attack, has been in police custody since shortly after the siege was broken.

Watch Out: Bangladeshi Minister Comments on His Published Photos with Fancy-looking Timepieces