People mill in front of shops in a street in Wamena, a town in Indonesia’s Papua province rocked by rioting in late September, Oct. 7, 2019.

Shops have started to reopen and some people are returning to the streets of Wamena, where nearly 40 percent of the population of this town in Indonesia’s restive Papua province fled or were displaced by anti-Jakarta rioting in late September.

But it’s an uneasy calm, although Indonesian government officials have assured people that it is safe to come back here. Thirty-three people were killed and dozens injured during the rioting on Sept. 23, in which protestors torched government buildings, businesses and homes, according to official figures from the authorities.

Around 16,000 of the 42,000 residents of Wamena, the largest town in the province’s highlands, were uprooted or evacuated as a result. Most of those who fled were Indonesian settlers or migrants who had moved to Papua, Indonesia’s easternmost province, from other parts of the archipelago.

“I just returned because Wamena is safe, but my son is still in the village because he is still afraid to go to school,” Hence Hubi, a resident who fled to Kurima in Yahukimo regency after the riots, told a BenarNews correspondent who was visiting Wamena.

The rampage broke out when a protest by high school students against alleged racist remarks by a teacher disintegrated into chaos on Sept. 23.

Many residents are haunted by the event and it will take them time to overcome their trauma, said Ribka Haluk, an official who heads the province’s social affairs department.

“The problem among teachers is trauma. It was a traumatic experience for them because the event started in schools,” Yosep told BenarNews.

“If people want to go back, there’s no problem,” he said.

During a cabinet on Tuesday, President Joko “Jokowi” Widodo ordered that government buildings, schools and other public facilities that were destroyed or damaged in Wamena be reconstructed or repaired immediately, said Basuki Hadimuljono, the minister for Public Works.

“Rebuilding will be carried out using locally sourced materials [and] involving local contractors and with assistance from the TNI,” Basuki told reporters, referring to the military.

Dozens of government buildings and schools were badly damaged, while 450 shops and 165 homes were burned during the riot, he said. 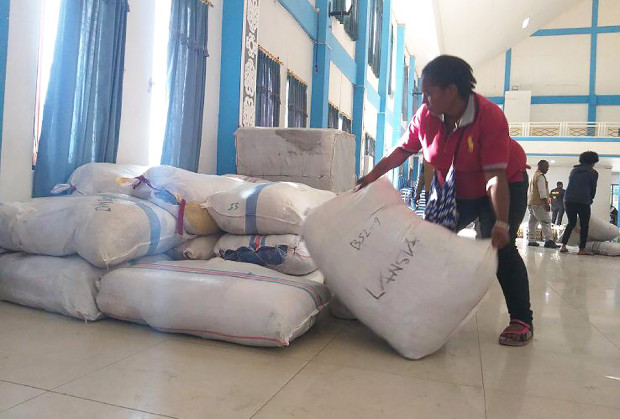 A volunteer sorts out bags of relief supplies at an aid depot in Wamena, Indonesia, Oct. 6, 2019. [Victor Mambor/BenarNews]

The Papua region, which makes up the Indonesian half of New Guinea island, was formally incorporated into Indonesia in 1969, after a U.N.-administered ballot known as the Act of Free Choice. Many Papuans and rights groups said the vote was a sham because it involved only 1,000 people.

The region has since been the scene of a low-level separatist insurgency. The population of Papua and West Papua, a neighboring province, is mainly Melanesian.

The Sept. 23 riot was the worst since 2000 when 30 people were killed during clashes between local residents and security forces.

“The event of September 23 was smaller than in 2000. But the number of victims is higher,” Andi, a migrant who has lived in Wamena since 1977, told Benar.

More than 1,700 people have been internally displaced while an unknown number of people have fled to neighboring districts such as Lanny Jaya, Tolikara and Central Mamberamo, officials said. 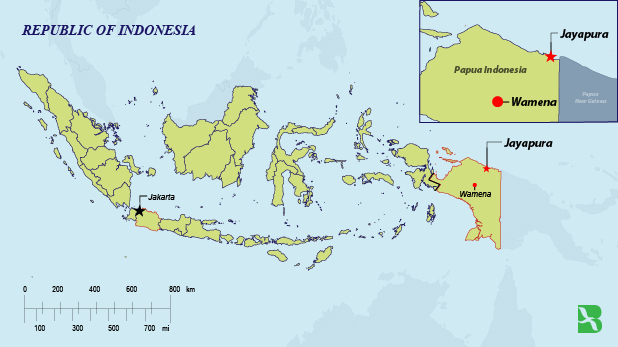 In Jakarta on Tuesday, the Ministry of Foreign Affairs defended a policy to restrict access to Papua for foreigners.

The Sydney Morning Herald reported that diplomats from the British, Canadian and New Zealand embassies had all asked the ministry for permission during the last month to visit Papua, but all their requests had been denied.

“It is clear … that foreigners, including diplomats are not yet allowed to visit Papua, until the situation becomes favorable,” ministry spokesman Teuku Faizasyah told BenarNews.

“If they insist on visiting Papua while the restrictions are still in place, they should explain the motivations behind the requests,” he said, adding, “Restrictions of access to areas with security problems have also been applied in many countries.”

However, Human Rights Watch on Monday called on Indonesia to lift restrictions on access to the Papua region by foreign media. It also urged authorities to launch an independent investigation into the Wamena riots that caused thousands of indigenous Papuans and other Indonesians to be displaced from their homes.

Brad Adams, Asia director for the New York-based watchdog, said the circumstances around the deaths of the 33 people were unclear.

“An independent investigation is needed to examine the role of the security forces and to prosecute anyone responsible for wrongdoing,” he said in a statement.

“The situation in Wamena is tense, yet it’s difficult to verify the circumstances because no journalists can independently go into the area to interview witnesses,” Adams added. “Having independent monitors on the ground will help deter abuses by both the militants and security forces, which would benefit all Indonesians.”

Jakarta has blamed the separatist United Liberation Movement of West Papua (ULMWP) and the National Committee for West Papua (KNPB) for unrest that has gripped Papua and West Papua since August, when thousands of protestors took to the streets to demand a vote on self-determination.

Late last month, President Jokowi said he was ready to hold talks with Papuan separatist leaders to solve the conflict.

“I will meet anyone who wants to meet me,” Jokowi told reporters then.

ULMWP chairman Benny Wenda said Jokowi must show that he is serious about solving the conflict’s root causes. Before any talks can take place, according to Wenda, Jakarta would have to agree to discuss a referendum on self-determination and withdraw an additional 16,000 troops and police it sent to the region in August.

“In order for us to believe that this has changed, Indonesia must show good faith and agree to our pre-conditions,” Wenda, who is based in Britain, said in a statement released on Monday.

“Our will to achieve a democratic referendum, to uphold our right to self-determination, has never been stronger.”

Rina Chadijah and Ahmad Syamsudin contributed to this report from Jakarta.

Thai Officials: US Troops Quarantine in Thailand Ahead of Joint Training