Indonesian Siti Aisyah leaves the Shah Alam Court Complex in Selangor, Malaysia, after prosecutors withdrew charges against her in the assassination of Kim Jong Nam, March 11,2019.

An Indonesian woman accused of murdering the North Korean leader’s half-brother at a Kuala Lumpur airport in 2017 returned home to Jakarta on Monday after prosecutors declined to press on with the case against her and Malaysian authorities released her.

An emotional Siti Aisyah left the courthouse in Shah Alam, Malaysia in the morning and flew to the Indonesian capital soon after. Malaysian authorities did not say why they were dropping the charges and letting her go.

“I’m so happy – I have no words to describe my feelings,” Aisyah told reporters and others after landing at Halim Perdanakusuma International Airport in Jakarta hours later.

The decision came as lawyers for co-defendant Doan Thi Huong of Vietnam began their defense phase of the trial following a pause of several months.

“I move to have the charges against Siti Aisyah withdrawn under section 254(1),” prosecutor Mohamad Iskandar Ahmad said in court early Monday.

The court session in Shah Alam adjourned soon after as Doan’s lawyers said they would petition for her to be freed as well.

Both Aisyah and Doan were charged with assassinating Kim Jong Nam, the estranged half-brother of North Korean dictator King Jong Un, in a chemical attack at Kuala Lumpur International Airport 2 on Feb. 13, 2017. Aisyah and Doan were accused of using a nerve agent, VX, to kill him.

Aisyah cried and waved as she was escorted by two of her defense attorneys out of the Shah Alam High Court.

The divorced mother-of-one who worked at a hotel spa in Malaysia before her arrest, flew home aboard a private jet owned by Indonesia’s ambassador to Kuala Lumpur, Rusdi Kirana, who owns Lion Air.

Back on home soil, while being prompted by an official, Aisyah expressed thanks for being freed and discussed her time in a Malaysian jail.

“I thank our president Mr. Jokowi, and all ministers who have made efforts to help me and bring me back to Indonesia,” she said.

Discussing her time in custody, she said, “they didn’t do anything to harm me.”

Her father, Asriah Nur Hasan, covered his face, got down on his knees in front of her and broke into tears when he and his daughter were reunited at the foreign ministry. Aisyah helped him stand.

“I thank everyone for their help, big or small. Thank you for helping my daughter get free,” Asriah said. “We apologize for any mistakes. May God continue to protect us.”

Aisyah offered thanks as well.

“I had wanted to see my family for a long time. I thank God that my parents always prayed for me,” she said.

Reports of her release spread quickly in her hometown of Sindangsari on Java island.

“We’ve heard the news and we’re so happy. We’re getting a celebration ready!” her aunt, Darmi, told Agence France-Presse.

Malaysian prosecutors did not state why they were not moving ahead with the case against Aiysah, defense attorney Gooi Soon Seng told reporters. He speculated that the prosecution had determined that it could not prove the charges against his client.

In a letter shown to reporters on Monday, Malaysian Attorney General Tommy Thomas informed a senior Indonesian official of the upcoming acquittal and release of Aisyah, and said his decision in the matter took “into account the good relations between our respective countries.”

Doan, who remains in custody, did not know about the prosecution’s decision.

“I am shocked and I hope to be freed too,” a tearful Doan said through a translator during a court recess. She had been scheduled to take the witness stand on Monday, but read only three sentences before her lawyers halted the testimony.

“On behalf of Doan, we will ask for the [attorney general] to review the case for the charge to be withdrawn on the same grounds as Siti Aisyah. We will make the application today,” lawyer Hisyam Teh Poh Teik said.

“We were surprised by Siti Aisyah’s decision. We were not informed of it earlier on,” he told reporters.

“Doan is not in a state to testify. She is traumatized. She broke down and cried,” he said, adding, “This decision is unfair. There is no equality and justice before the law. If Siti Aisyah is acquitted, so should Doan.”

Judge Azmi Ariffin said he was “reluctant” to grant the petition on Doan’s behalf. He said the trial would resume at 10 a.m. Thursday if the Attorney General’s Chamber rejected the application.

He granted Aisyah a discharge not amounting to acquittal, meaning she could be charged again later if there was new evidence in the case. 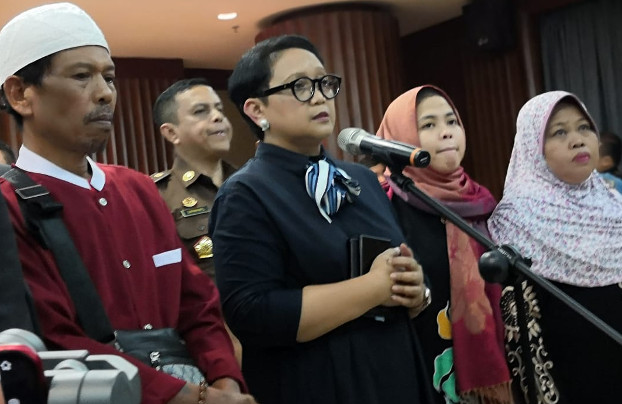 In a statement issued midday Monday, the Indonesian Embassy in Kuala Lumpur described Aisyah’s release as the culmination of a long diplomatic effort directed by President Joko Widodo, who is aiming to win a second term in office in elections scheduled for April 17.

“Today is a day of joy for us as a nation,” he later told reporters during a press conference at the foreign ministry.

“So it was a long and concerted effort to help our sister Aisyah and make sure that she is here with all of us.”

Prosecutors alleged that Aisyah and Doan approached Kim Jong Nam and smeared a colorless and odorless substance across his face in the airport’s departures terminal. He died about 20 minutes later. The two young women were arrested within days.

Both pleaded not guilty, with their lawyers arguing that they were misled into thinking they were taking part in a prank for a Japanese comedy show on YouTube.

Prosecutors argued that the two Southeast Asian women, along with four North Korean suspects who fled the country and remain at large, took part in a premeditated attack and had practiced for it.

Ali Nufael in Kuala Lumpur and Nisita Kirana Pratiwi in Jakarta contributed to this report.