Malaysian police on Friday released a list of 45 foreigners arrested since January for suspected links to the Islamic State (IS) or other terror groups, a marked increase in arrests of alleged "terrorist-fighters" compared with previous years.

The suspects include nationals from as far away as Iraq, Turkey, Albania, Yemen, the Maldives and China as well as from nearby countries including Bangladesh, Indonesia and the Philippines, Police Inspector-General Mohamad Fuzi Harun said in a statement.

Some of these suspects with links to IS, including three Iraqis, were once based in Iraq or Syria, where the extremist group’s main strongholds have been losing ground to government offensives, the Malaysian police chief indicated.

“They have been ordered to infiltrate to several countries around the world to launch attacks for Daesh,” Fuzi said, using a different term for IS.

He credited cooperation and intelligence sharing with foreign intelligence and enforcement agencies in leading to the arrests.

“The Royal Malaysia Police will continue to take action against foreign terror elements to thwart any planned attacks on Malaysia,” Fuzi said.

Those 45 suspects arrested through Oct. 6 include nine Abu Sayyaf Group (ASG) members, three from Turkey’s Fetullah, one from an Albanian terror cell linked with Islamic State, and another from Bangladesh’s Jamaatul Mujahideen, he said.

Thirteen were charged under the Security Offences (Special Measures) Act 2012 (Sosma) and 12 others were deported to their country of origin. Police identified and released photos of the 25.

The three Turks – Turgay Karaman, Ihsan Aslan, and Ismet Ozcelik – were arrested in May on suspicion of threatening Malaysia’s national security. Malaysian police said they belonged to the Fetullah group led by a U.S.-based Turkish cleric, Fetullah Gulen, and which Turkey had branded a terrorist organization.

International human rights groups later deplored Malaysia’s decision to deport the trio back to Turkey, saying that their lives would be put in danger.

Regarding the other 20 suspects, Fuzi said one was detained under the Prevention of Terrorism Act, seven were released and 12 others were under police investigation.

The number of foreigners detained during the first nine months of 2017 reflects a significant increase over detainees from 2013 to 2016, according to information from police counter-terrorist special branch chief Ayob Khan Mydin Pitchay at the end of last year.

At the time, Ayob said 264 militants were arrested over a four-year period, but only 34 were foreigners.

Among the foreign militant suspects picked up in Malaysia in 2017 was Hajar Abdul Mubin, 25, (alias Abu Asrie), a Filipino and alleged mastermind of a foiled terror plot against the Southeast Asian Games in Kuala Lumpur in August.

Hajar, who has been identified by the Philippine military as the right-hand man of a senior leader of ASG, was charged Sept. 25 on suspicion of being a member of a terrorist group along with three other ASG suspects, according to court documents.

Also on Friday, Fuzi confirmed that counter-terrorism police officers arrested several people in the state of Kelantan this week on suspicion of having terrorist links, including an alleged  teenage bombmaker.

“It is too early to reveal any details but I will release a statement in the next two to three days,” he said.

Meanwhile, the Malaysian Home Ministry on Friday said it was investigating security firms regarding the possibility of militants working as guards, the Home Ministry Secretary General Alwi Ibrahim said in a statement.

“If investigations find they were complacent in vetting their future employees, among other actions, their licenses would be revoked,” he said commenting on the Sept. 14 arrests of seven suspected ASG militants who were working as security guards in the Klang Valley. 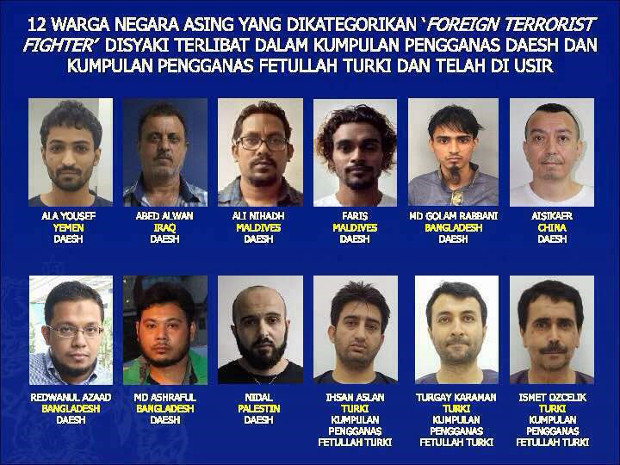 Police released photos of 12 suspected foreigners who have been deported from Malaysia on suspicion of terrorist activities. (Courtesy of Royal Malaysian police)