Children of slain journalists take turns kicking a tarp depicting the Ampatuan clan during a visit at a massacre site in Ampatuan town, in the southern Philippines, Nov. 18, 2018.

Nearly a decade has passed since Elliber Cablitas lost his wife, Marites, to the Philippines’ worst political massacre that left 58 dead, including journalists, yet justice has eluded him despite the government’s repeated promises that convictions will come.

Marites, who worked as publisher of a provincial newspaper and a news anchor at local broadcaster RPN, was among 32 media workers who were executed by followers of Andal Ampatuan Sr., patriarch of a local Muslim clan.

“For the ninth year, we are here again to remember them and feel the pain,” Cablitas, 52, told BenarNews during a recent trip to a remote hillock in the southern town of Ampatuan, where the grisly murders occurred on Nov. 23, 2009.

“It’s been too long already but we are still searching for justice because nobody has been convicted,” he said.

The journalists had joined a convoy led by the wife of Ismael Mangudadatu, who was filing his candidacy to contest the governorship of Maguindanao province against his rival, Ampatuan. Mangudadatu’s wife and several relatives and supporters were among the 26 other victims.

Ampatuan had earlier warned Mangudadatu against running for governor.

The convoy was flagged down along the highway by about 100 armed followers of Ampatuan. At gunpoint, the people from the convoy were led to a grassy hillock where they were peppered with bullets, and their bodies dumped in three freshly dug graves.

Mangudadatu had wrongly thought that sending his wife in a huge group that also included local journalists would guarantee their safety.

The scale of the violence was unprecedented in local politics, and it stunned the world. The Committee to Protect Journalists called it the “single deadliest event for journalists in history.”

The massacre also brought to light the intense rivalries in Philippine local elections, especially in far-flung areas where private armed groups are known to be on the payroll of political warlords.

No members of the Ampatuan clan have been convicted, and the murder trial has been moving slowly through the courts.

Earlier this week, Philippine justice officials announced that multiple murder cases against Andal “Datu Unsay” Ampatuan Jr. and other suspects connected with the massacre had been submitted for a resolution at a regional trial court in Quezon City, near Manila, the Philippine Star reported.

“Per information from our prosecution panel, the case against Unsay is now submitted for decision upon ruling of the court on his formal offer of exhibits,” the newspaper quoted acting Prosecutor General Richard Anthony Fadullon as saying.

Menardo Guevarra, the Justice secretary, had earlier indicated that his department expected the court to reach a verdict in the trial sometime within the first three months of 2019, according to the Star. 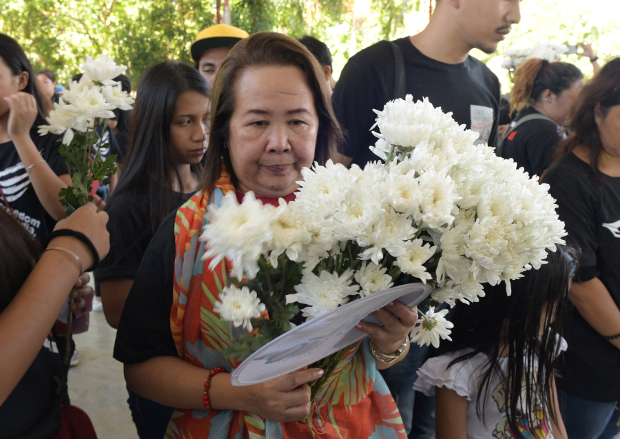 A relative brings a flower offering during a visit at the massacre site in Masalay, Ampatuan town, Maguindanao province, Nov. 18, 2018. [Froilan Gallardo/BenarNews]

‘The pain grows every year’

Last weekend, BenarNews joined relatives of the victims as they visited the site of the massacre.

Under the noonday sun, the relatives were overcome by grief.

They were joined by dozens of journalists, who gathered at the site to hear a special Mass for the victims. They lit candles, offered prayers for the victims and torched posters bearing the pictures of the principal suspects.

“Every time I set foot in this place, I can feel the anger inside me,” said Ayeesha Vanessa Dilangalen. “My mother did not deserve to die the way she did.”

Her mother, Bai Eden Mangudadatu, was the elder sister of Ismael Mangudadatu. She had accompanied Mangudadatu’s wife, Genalyn, on that fateful day.

“There is not a day that I come to visit here but, without justice, the pain lingers,” Dilangalen told BenarNews. “We feel there is no closure for the victims and the pain grows every year.”

The visit was also painful for the children of the victims, many of whom were still young when they lost their parents. 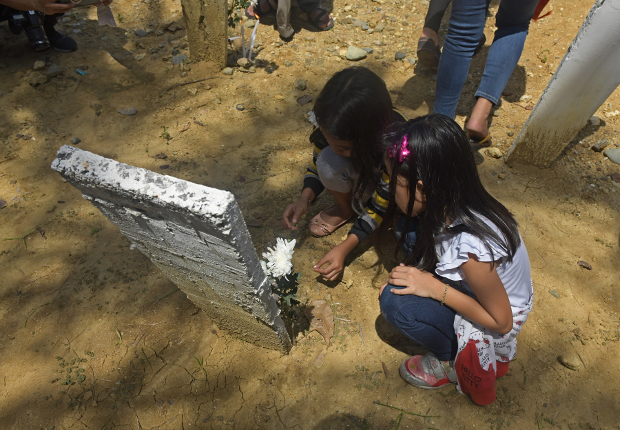 Jinx Cyrus Maravilla, 14, was only three when she lost her father, Ernesto Maravilla, who was employed at local radio station Bombo Radyo.

Faded photographs, she said, offered her the only connection to a father she barely knew.

“My only treasured memory of my father is that before he left, he gave me a cone of ice cream,” Maravilla said. “Then he was gone.”

Fellow mourner Princess Anne Caniban, 14, was so enraged that she kicked a big tarp depicting the Ampatuan clan that was on display at the covered basketball court where the ceremonies were held.

“Convict the Ampatuans!” she said, tears rolling down her cheeks.

Princess Anne is the daughter of another victim of the massacre, John Caniban of Periodico Ini newspaper in General Santos City. She later lit a candle and released a white balloon into the air as a form of remembering her father.

Nonoy Espina, a spokesman of the National Union of Journalists of the Philippines, still remembers feeling numb and cold when he arrived at the site nine years ago.

“I am also angry that our justice system is so slow that the court has yet to decide on the case nine years after,” Espina told BenarNews.

“I can still remember the bodies on the ground here,” he said. “So much death was here at that time.”