Residents of a flood-hit village near Tuguegarao, Philippines, gather to receive bags of humanitarian supplies dropped from a Philippine National Police helicopter, Nov. 16, 2020.

Much of Cagayan and Isabela provinces in the far northern Philippines remained under water Monday from floods caused by Typhoon Vamco (Ulysses), as the government rushed relief supplies to residents whose lives were disrupted as a result of the storm.

At least 67 people were killed and 26,000 homes were damaged in the third typhoon to strike the country in as many weeks, after Vamco made landfall on Luzon – the main Philippine island in the north that is home to Manila and other heavily populated cities – on Nov. 11, officials said.

More than two million people were displaced as floods swept through the Philippine capital and nearby areas, officials said. Five days after the storm hit, at least a dozen other people were still missing.

“Here in Metro Manila, our rescue operations have been demobilized because most of our countrymen who needed rescue had been rescued already,” said Mark Timbal, spokesman for the national disaster agency.

In Cagayan, the northernmost province which was not in the typhoon’s direct path but was flooded by heavy rains brought on by Vamco, authorities said they had to release water from Magat Dam to prevent it from bursting.

The flooding there and in Isabela has been the worst in decades, officials said. In Cagayan alone, 24 of the province’s 29 towns have been deluged with flood water, forcing many residents to take shelter on rooftops.

By Monday, however, the water had subsided in some parts, leaving thick mud in its wake as authorities began a massive cleanup, as witnessed by BenarNews correspondents who travelled to the flooded far north.

In a statement, the U.N. Office for the Coordination of Humanitarian Affairs (OCHA) reported that the typhoon had wreaked U.S. $20.1 million in damage to agriculture in eight regions.

“Tens of thousands of homes in low-lying suburbs of the national capital were submerged in roof-level floods, trapping residents in their rooftops while awaiting rescue,” the United Nations agency said.

Due to the wide path of destruction caused by the storm, Philippine disaster officials recommended that a state of calamity be declared for the whole of Luzon Island.

“It was approved during the meeting the recommendation for President Rodrigo Duterte to place under a state of calamity the entire Luzon to address the impacts of the latest typhoons that hit the country,” said Undersecretary Ricardo Jalad, executive director of the National Disaster Risk Reduction and Management Council. 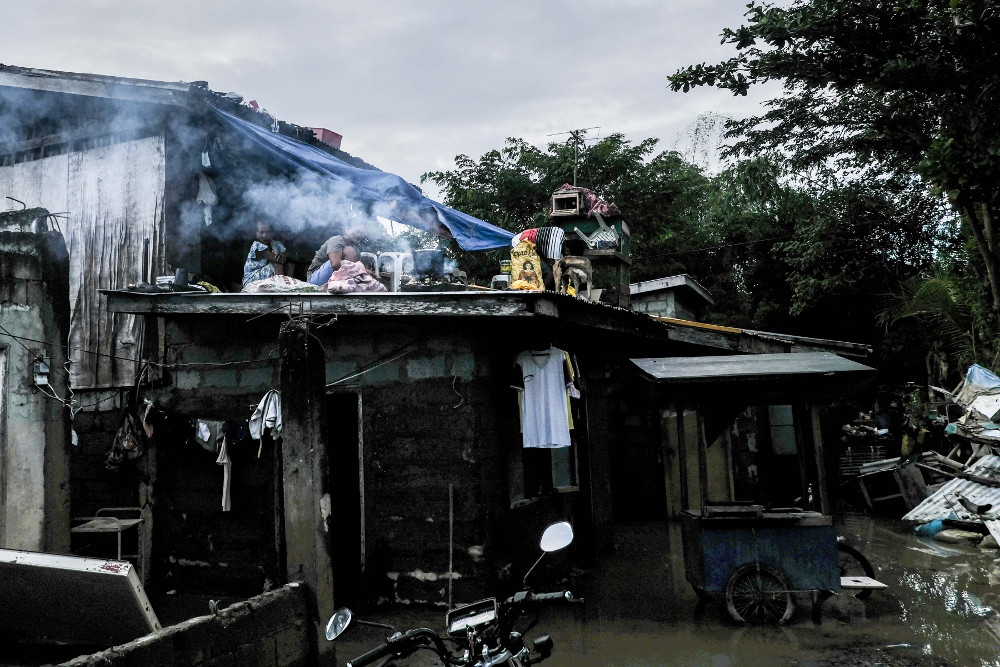 Residents of Linao East, a village in Tuguegarao, Philippines, cook a meal on the roof of their home, Nov. 16, 2020. [Jojo Rinoza/BenarNews]

During the weekend, President Rodrigo Duterte flew to Cagayan’s capital, Tuguegarao, to assess the damage. He defended local officials from criticism that they had been negligent.

“Don’t believe in that. That’s garbage. You know, the one in-charge of preparations for emergency, long before the typhoon arrived, they were already deployed here,” the president said.

Duterte also defended the decision to release water from Magat Dam, which flowed into Cagayan and caused the flood.

Interior Secretary Eduardo Año had proposed that during typhoons and other calamities, the National Disaster Risk Reduction and Management Council should be the one to approve the release of excess waters by dams.

“Depending on the rainfall forecast, the dam floodgates could be opened even before storms hit,” he said.

In Isabela, provincial Gov. Rodolfo Albano III told reporters that local authorities had prepared for Vamco’s effects but had not anticipated the sheer amount of rainfall that came with the storm.

“We were prepared but we were caught unaware of this kind magnitude of the volume of water coming into the Cagayan River,” he said.

“We never expected this much water because the last time it happened was in 1978, so after more than 40 years of flooding, this is the only time the Cagayan River swelled at this magnitude,” he added.

Jeoffrey Maitem contributed to this report from Cotabato, Philippines.